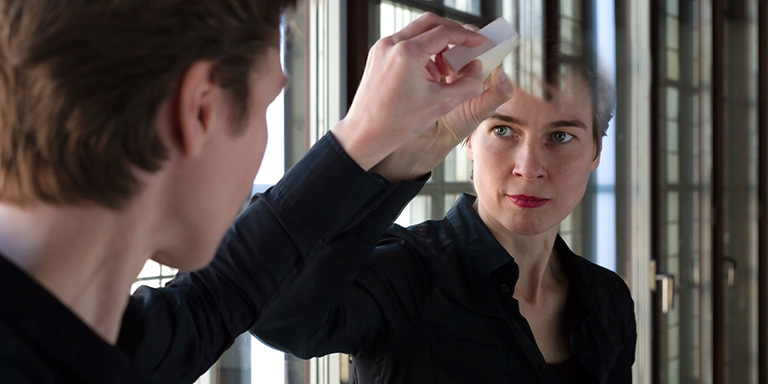 15 years ago I had the good fortune of still being a young composer. I was writing a composition for the ASKO ensemble to be performed in the Gaudeamus Muziekweek, an evening very much like this one. And for that piece I did a small survey among composers asking them a question I was most interested in at the time: ‘Where do you do it?’.

Composers, being coöperative people, gave me some insightful and candid replies. Most composers do it at home. And they described some of the circumstances to me: “I hear cars, shouting people on the street, bicycles, dogs, cats, movie sounds.” , “I hear dogs barking… people talking… scooters passing by… drunk people after 1 a.m. talking loudly and laughing… and planes across the sky… sometimes the wind but always the rain against the window.”, also: “Most of the time I have the TV on while I compose. Preferably with a football match, tennis or the BBC.”

The thing I was after was discovering what the equivalent of a white canvas is for a composer. It’s not empty notebooks or empty barlines. It’s not silence. It’s the contrary. It’s all of the sounds of the world we live in. It’s the sonic environments of the spaces we work in. The backdrop of citysounds, birds, rain, wind, scooters, neighbours and the soft humming buzz of electronic devices combined with all the thoughts that voluntarily and involuntarily enter our minds. Thát is our (not so) white canvas.

In 15 years a lot has changed. The sounds around us have changed. But more importantly, the socio-political atmosphere around us has changed. Financial support for the arts has rapidly dwindled. When I sometimes have a moment of despair and worry out loud about the future of my profession and sigh that I’m sad and angry that the efforts of artists and musicians are valued so much less than the efforts of almost everybody else, my boyfriend, who is a civil servant, looks at me unforgivingly and says “well, nobody has ever applauded me for my work, Mayke”.

He is right of course that applause is also an expression of value. But receiving applause is actually one of the most awkward things for the majority of composers. The first thing you see composers do when they walk on stage is to think “Where can I get off!” as they clumsily take something that resembles a bow, often right at the moment when someone is trying to hand them flowers, or shake their hands, and who they then bump into while getting upright, already making their way towards the exit, forgetting to shake the hand of the conductor or the first violin.

To learn?
To listen?
To think?
To invent?
To try to catch fleeting dreams?
To challenge thoughts and opinions?
To question likes and dislikes?
To practice patience?
To look for beauty?
To look for meaning?
To dig deep into things that genuinly interest us?
To face fears?
To have fun?
To build new instruments?
To find new usage for old instruments?
To take ourselves seriously?
To take others seriously?
To further develop a craft that has already been enchanting people for a few hundred years?
To figure out what comes after post-modernism, post-minimalism, post-eclecticism, festivalism, hipsterism, neo-barbarism or neo-conventialism?
To change the world?
To let the world change us?

Or, to quote the five nominees of the Gaudeamus Award 2017:

“To perform the delicate dance of creating predictability and unpredictability” (Sky Macklay)
“To write music as a form of study” (Ethan Braun)
“To translate the sometimes confusing and overwhelming multisensory experience that real life can be into music” (Chaz Underriner) or… “to do whatever the hell I want” (also Chaz Underriner)
“To seek out a dialogue (with musicians, listeners, music history and developments outside of music)” (Aart Strootman)
“To give time to sounds to develop, and hear and appreciate all the complexities that are going on within the sound itself” (Ivan Vukosavljevic)

This is of course only the tip of the iceberg of the myriad possible reasons why composers do what they do. And why what they do is not only interesting for the composers themselves, but also for musicians, music-experts and music-lovers. We are spending our time with experimental new music not out of naiveté or apathy, or for not wanting to address the world’s problems more directly, but for bringing something to this world that we think is of the utmost importance: getting together, listening to each other, working together, discovering new things together and for making the most of our humanity by putting our ears where our hearts are.

One thing we can be sure of: every minute spent on new music is a minute not spent on

While spending time on new music we’re not underestimating people’s tastes, intelligence and need for engagement and we’re not earning shameful amounts of money.

That leaves me with only one conclusion to draw: let’s all spend as much time as we can with new music and simply by doing so, let’s do nothing less than save the world!